Who is Captain Dan Hanley? 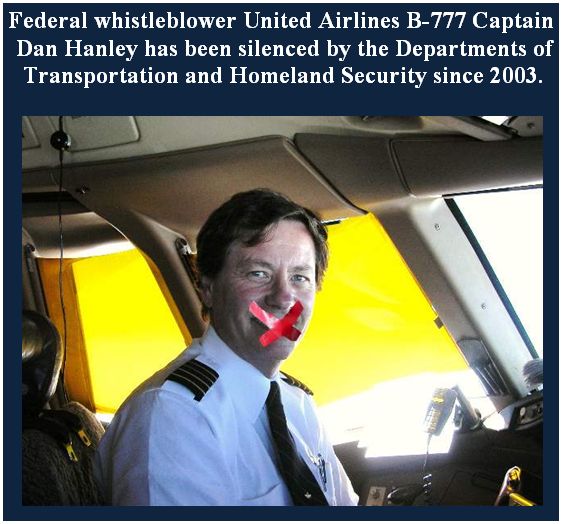 I am a Muslim American citizen married to a Muslim Pakistani, Huma Hashmi, and currently reside in Islamabad, Pakistan. A former 35 year veteran pilot, having flown 20, 000 flight hours in U.S. Naval and commercial aviation, I had never failed a physical examination or psychological screening nor had I ever failed an aircraft check ride or had an incident, accident, or flight violation over this span of time.

In 2003, after having numerous Federal Aviation Administration (FAA) and United Airlines mandated reports stonewalled by the FAA. United Airlines management, and my pilot union, the Air Line Pilots Association (ALPA), I reported on safety and security issues concerning 9/11 and was removed from flight schedule, required to visit a company-appointed psychiatrist who declared me "mentally unstable", and was medically grounded for life.

Unfortunate for the FAA, United, and ALPA, I had been informed by my fellow pilots that this could happen, so prior to being grounded, I sought counseling and psychological testing from the best mental health professionals in the Atlanta area who declared me mentally healthful.

In 2006, a multimillionaire from Chicago named Michael Lynch contacted me advising me of critical evidence of alleged bankruptcy fraud that included an alleged corrupt Chicago Chief Bankruptcy Judge Eugene R. Wedoff who oversaw the distress termination of United Airline employees $10-billion pension fund, the largest pension termination in history, and Mr. Lynch's company, McCook Metals, LLC who had his multi-million dollar aluminum company stolen from him by the same judge who attempted to "judicially kidnap" his three children and take possession of his home and all his possessions.  Him and his son had a mob contract out on them.

I filed for whistleblower protection as a Securities and Exchange Commission (SEC) Sarbanes-Oxley whistleblower and eventually, over a three year attempt, was successful in convincing the SEC to investigate my allegations but the Department of Justice/Federal Bureau of Investigation refused to assist in the investigation.  The case was dropped.

Without going into further detail, please read this  and this that expounds on the above.  Also, please browse through the archived pages to read who in government I contacted during this nightmarish process.  To protect myself legally, I sent every letter written via certified mail for which I have proof of receipt for each letter I mailed.

For additional information regarding my work, please listen to my Whistleblowing Airline Employees Association Blog Talk Radio Programs and my radio interview with David Gibbons on his program"In Discussion".

My wife and I married on January 11, 2010 and I relocated to Islamabad where I continued with the work above until I realized that my efforts were an exercise in futility and discontinued my whistleblower efforts because I realized that the supposed "democratic" U.S. government was no longer "Of the people...for the people...by the people.

During the course of fourteen years from 2001 to present, I kept in touch with countless 9/11 global whistleblowers/groups and learned much information. Realizing that it was fruitless to attempt to force the U.S. government to redress issues concerning September 11, 2001, we would need to funnel our information to an independent outside source who had previously befriended President George W. Bush to assess the validity of our assertions.

Over the years, especially my last five years living in Pakistan, I realized the horrific global carnage that had occurred due to Bush's so-called "war on terror" and his illegal Bush Doctrine that enabled the U.S. government to unilaterally abrogate the sovereignty of any country in the world it suspected of harboring terrorist all under the false pretense that the 9/11 Commission's final conclusions were valid even though it was a "false flag "operation and excuse to unilaterally and illegally invade foreign lands suspected of harboring such as Afghanistan, Iraq, Pakistan and Yemen.

Although tragic, the 3 lives lost and 264 injured in the Boston Marathon bombing and the Charlie Hebdo terrorism that killed 11  and injured 11 people with public outrage in France and globally further exacerbating "Islamaphobia", these tragedies pales in comparison to the 132 children killed in the Peshawar school attack or the 55,000 Muslims killed in Pakistan since 9/11. Where have we heard the public outrage over this?  Where were the leaders of nations who were marching arm-in-arm through Paris?  Why wasn't there a march through the streets of Peshawar similar to this?  Oh wait...I almost forgot...those were only Muslim children.

Being an American Muslim living in Pakistan the past five years observing the carnage taking place, while realizing that myself and many others across the globe had important information regarding the 9/11 false flag operaton, I couldn't take it anymore...I know too much about the truth regarding 9/11...hence the blog and facebook group "Pakistanis for 9/11 Truth".

My wife, Huma Hashmi, and I cannot invite very many people to be our facebook friend for if we do not know them facebook will cancel your account for doing so.  This is very important!  We need as many Pakistani Muslims, Muslims across the globe and others to invite us both to be their facebook friend.  Also, we have a facebook group "Pakistanis for 9/11 Truth" you can join.  Simply open the facebook menu by clicking the upper left hand corner of your screen and type in the name of the group.  This will take you to the site where you can join us.  It is absolutely the optimal method of social media communication available.

Finally, when you visit our blog, please post comments at the bottom and you can "Share" each page by going to the very bottom of each page on the left.  This is also extremely important.

There are 1.6 billion Muslims in the world.  Since 9/11, Islam has been slandered, the Holy Prophet Mohammad (pbuh) has been desecrated, and the Holy Koran has been incinerated.  We must try to reach out to every Muslim on the planet to share information that will prove 9/11 was an "inside job" and not an act of violence perpetrated by Osama bin Laden and a small group of men in a cave in the mountainous regions of Afghanistan.

Not one single very experienced pilot in the group "Pilots for 9/11 Truth" could perform the aerial feats supposedly accomplished by private pilots on 9/11. With there only being 200,000 pilots world wide, the other 6-billion people have been duped.  Please recall that not one airline pilot was permitted to testify before the 9/11 Commission.  Any question as to why?

When the truth is revealed, Islamaphobia will vaporize around the planet.